The true Theory of Everything
Search

NOTE: A tparticle is a term used to describe what is traditionally thought of as being a particle moving through empty space. ie: photons, electrons, muons, mesons Bosons etc which are in fact energy moving through the dark matter/spacetime lattice.

1. Run this version of the double slit experiment,make 2 receptors for photons 1 left, 1 right, 1 behind each slit where the twin band is usually formed, fire photons one at a time, a photon passing on the left=1, a photon passing right=0.
See if it returns coherent binary code or if it responds correctly to yes/no questons, if it does it is the Universe's spirit/consciousness adjusting the focus of detection. Link it up to a system to see what "IT" has to say. If this works we should have all the answers to all of mankind's problems. Explained in slightly more depth in this 6 minute video.
https://youtu.be/8PRAQxhehu8


2. Another way to run a diffraction experiment (shown in the drawing below) is like this.
Rather than record using slits run the experiment like so. Have the wall facing the laser made from light sensitive material and 2 (or more) extra walls coming out at angles from the main wall (similar to the angle of reflectors on photographic shoot lighting) these also made from light sensitive material. The angle should be relational to the distance from the laser so these walls central point is a slightly closer or further distance from the laser but at the same or similar angle (facing the laser tip full on) as the main wall facing the laser directly and because the tparticle is concentrated forward they should be near enough but outside the main area where the main tparticle hits and all 3 (or more) walls should show areas of impact at the end if the tparticle gun is moved slightly left and right but still facing the main wall. Showing that like the double slit experiment the photon is always only one part of a vibrational wave the part in the dimension of time that we are focusing on. The part of the wave usually perceived as a single particle will leave the mark on the wall but the wave will continue out in all forward directions passing the other walls appearing also as particles but leaving no mark due to arriving in other locations of the 3 time dimensions. In fact we should in theory be able to setup photosensitive screens behind the laser tip at equal distance and angle as the main facing wall/screen and record some marks there if we leave the experiment to run and analyze results at the end (unless there is a peculiar as yet unkown relationship between time running forward along a backward expanse of space.)


If all walls are hit when not detecting for time we already know that they are always waves. However one could perhaps theoretically detect specific areas corresponding to the path the tparticles take to the respective walls. For example one might place a microscopic thread from the ceiling to the floor of the apparatus made from the same material as the filament used in Akira Tonomura's experiment setup so that a passing wave can be detected, similar to how buoys can be used to detect tsunamis. As the wave passes the thread vibrates and detection occurs. This being so fine and in only one location means it cannot affect coherence or cause any deflection or destruction of the wave, any perturbation will be insignificant and in the wake of the wave and we don't need to fire any photons at the wave to detect tparticles. The offset walls may be adjusted to have variations in distance from the tparticle gun. However what we should see is that the wall nearest the detector is the one and only wall registering hits as the time dimensions are reduced to that locality....but...note when I say NEAREST our human minds think automatically in spatial distance, what I am actually saying is closest in TIME. This should show that the wave will not primarily hit the direct facing wall with higher certainty like we would expect from a tparticle but it will hit the wall closest in time to the arc of the wave passing the detector. So even if the detector is placed in matter closer to the wall on the left like seen in the image of the layout of the new experiment, if the wall on the right is closer to the arc of the wave any mark left in matter should show up on the right not the left where the detector is closest in space. It should show up where the detector is closest in time. The crucial point is that even though the wall on the left in the picture is nearest in space to the detector it will not register marks while the wall further in space but nearer in time (universal time) will. This shows that it must be setting the time bandwidth that is happening or else there would be a violation of the laws of Special Relativity.  To maintain integrity with Special Relativity there is no way that the detector can send information to the wall on the right before any tparticles arrive at the wall on the left so we must be setting the bandwidth of time and that conscious information set by conscious markers is travelling faster than the speed of light, either via an as yet unknown dimension of space outside the field (which seems unlikely), time dilation being variable in one location of space and affected by multiple time dimensions interacting in a non constant universal time which is always variable at every field particle  (which seems logical and.likely) or via vibrations sent along the field similar to neutrino or gravitational waves [2] possible but still unlikely. The experiment setup is shown below. 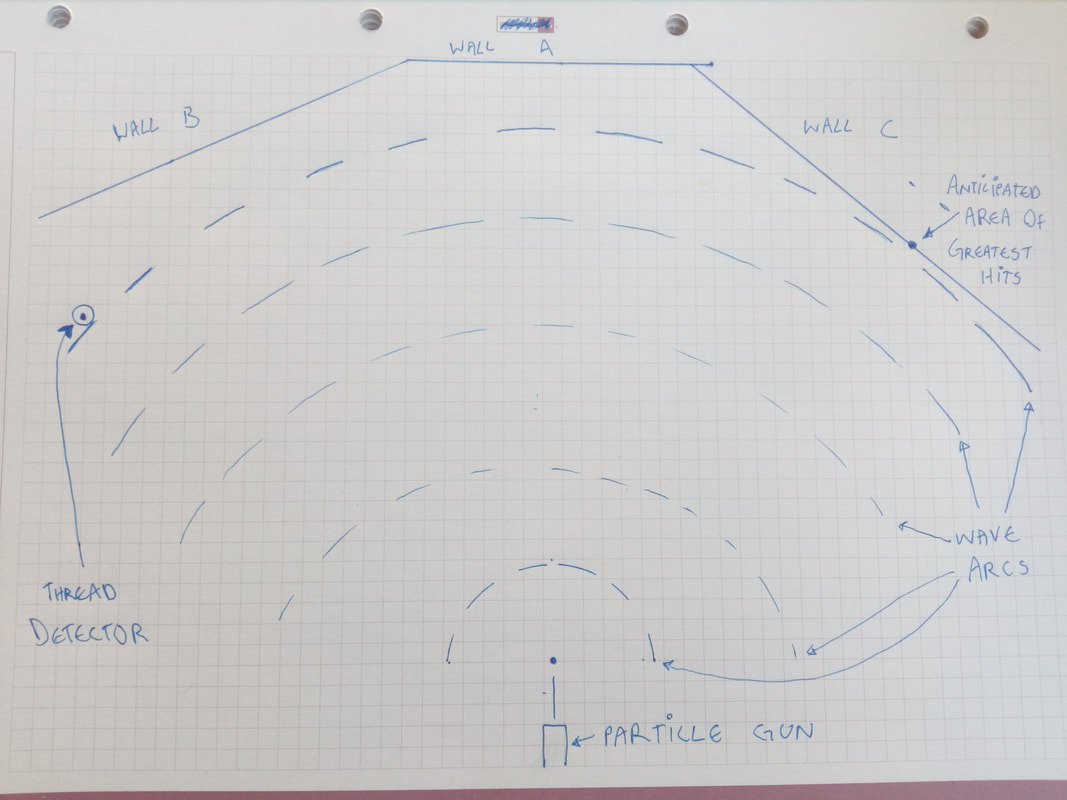 3. Below is another variation on the filament used as a detector between the slits and the back screen to increase or decrease the size/range of rhe interference pattern. 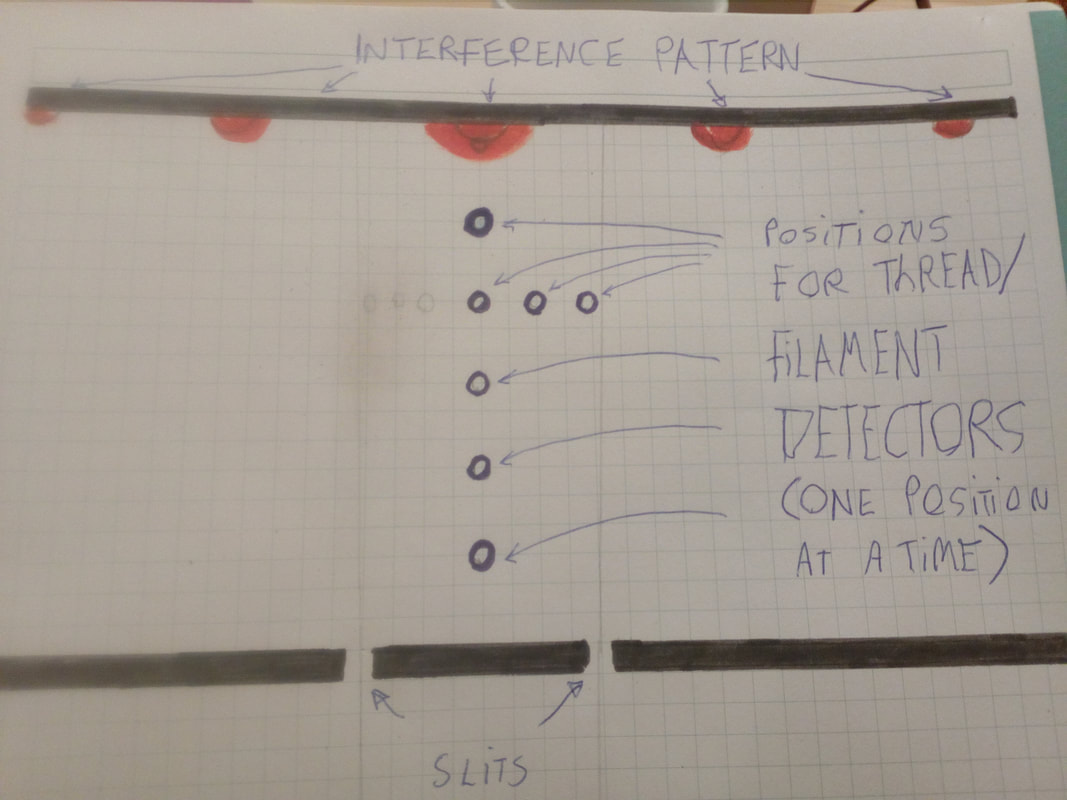 4. To create neutrinos fire high energy electrons in rapid succession directly forward through a vacuum. Have the vacuum surrounded by chambers designed to detect for neutrinos and we should detect neutrinos moving forward perpendicular to the path of the electrons. This because they are ripples from the torlectrons detected moving out through the drak matter/spacetime/lattice.
Anyone trying this remember the neutrino waves will travel out 137 times faster than the electrons so the detection device for the neutrinos must be located in a direction perpendicular to the electron path but 137 times farther out from the path source of the electrons.

5. To make matter from light point one, more or many high energy gamma rays or even visible light photons to meet at a specific point. Have that meeting point as close as possible to a spherical object made out of extremely dense material. The closer the meeting point the better,micro or nanometres from the surface. What we should see are electrons, muons, cosmic rays etc forming due to the radiation being twisted into matter. This is due to some waves interacting, compounded by the curvature caused to the fabric by the dense object causing the waves to be twisted into vortexes: torlectrons. These are then detected as electrons and when the electrons are also caught in loops due to the curvature we should get muons, mesons and other particles forming.


6. To detect for tparticles lost in time, outside the time that is detectable within our physical range, we should try to fire distinguishable photons at the reflectors on the moon from different locations.  These reflectors which astrophysicists at MIT have been bouncing lasers off since 1964 (5 years before the Apollo missions in case anyone still thinks it was men who put them there). Fire a specific number of photons. I expect we will get less photons returned when they are fired at the moon when it is moving away from us and more detected returning when it is moving towards us. Say for example when the moon is directly over Nairobi and photons are fired from a location it is moving towards, say for example New York or Rio Dejaneiro. Then fire the same amount of photons from a location the moon is moving away from say Tokyo or Adelaide.


7. To verify whether gravity and pathchange is the main cause of cosmological redshift measure the redshift of a star as it is in the night sky and measure the same star's redshift again when it is detectable close to the sun during a solar eclipse. This has already been done by Andrea Ghez's team's work on SO-2 but no one seems to realise and/or acknowledge the implications this has for redshift.